The day finally arrived, who knew what to expect?! Well I don't think anyone went away disappointed.

It's now the day after, I'm sat in a café in central Amsterdam trying my best to recall the events of the day as well as my total experience.  As I'm looking back on photos and memories I have a big smile on my face.

Welcome to The Lighthouse

On arrival opposite the venue was a pop up tent with a few people hanging around, Amiga people.  At this point I was on my own, but quite quickly started chatting to people around me.

I had traveled from the UK and the guy next to me in line had driven from Germany.  We couldn't make sense of what looked like just a regular bar with a small marquee outside.  Was this it?! 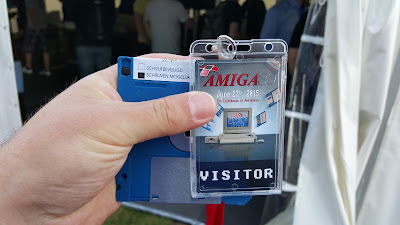 I'm not going to lie, at the very beginning I was starting to worry as we ALL packed in to what seemed a small bar which had a mini stage in the corner.  Without further ado the event kicked off.

With a quick introduction and a brief hello from our hosts and RJ, we got straight in to it... 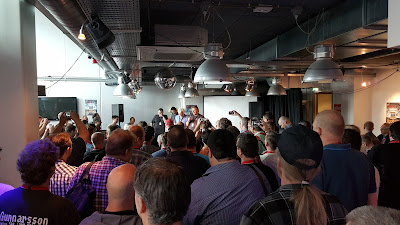 We are, your friends!

Interestingly, the day started with the guys behind FriendOS.  As you can imagine the room was packed with hardcore Amiga fans and I don't think half the room was expecting something slightly off topic. So understandably some of them filtered out and chatted at the back of the room.

For me though, I was VERY interested. Literally the day before I had been sat on the train thinking about the current state of operating systems and if anyone could actually make a difference with the world with the concepts behind the original Amiga OS.  Sure there would need to be a lot of work to be done, but it's what I'd been thinking about. 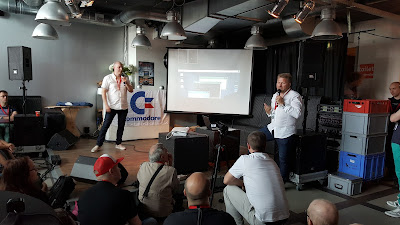 It turns out others have been thinking the same.  FriendOS.  In summary they're creating an OS that is platform agnostic, modular and uses the internet to power everyone.  They are taking the best ideas and parts of existing operating systems, including several fundamental elements from the Amiga and creating a new OS.

You can find out more about their project here: friendos.com  They have also just launched a Kickstarter campaign here: https://www.kickstarter.com/projects/apblix/friend-platform-secure-own-and-unify-your-digital

They presented at the Amiga 30 event because they wanted to get feedback from the Amiga community about what they are doing.  I really liked what I saw, I was able to chat to Arne later in the day, and I'll be getting in touch over the next few days.

Mike from Cloanto, makers of the awesome Amiga Emulator, Amiga Forever http://www.amigaforever.com/ gave us all a free copy of the latest version.  He gave us a run down of this history and where he's taking it. 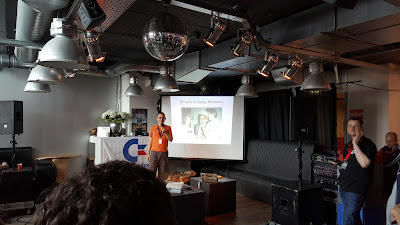 These guys were as passionate as anyone else in the room.  I have to admit I didn't know who they were before they started, but as soon as it started I realised I had seen their youtube clips that have become so popular in the Amiga community. 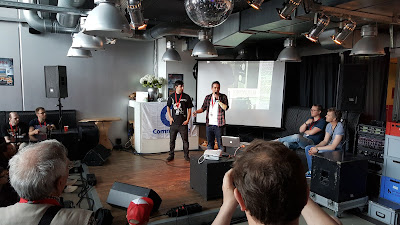 They presented a short video piece which had many many great Amiga memories in.

Huge respect to Trevor, I hadn't realised the amount of effort that has been going in to the hardware side of the Amiga (well due to legal complications, the closest thing to an official Amiga) over the last few years. 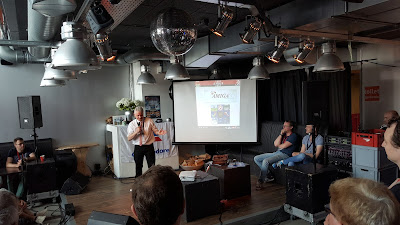 As we all know the Amiga intellectual property and copyrights situation is a complete mess, a complex mess.  Trevor confirmed this is still the case, but he's trying damn hard to do the best he can for the Amiga, and I take my hat off to you.  http://www.a-eon.com/

I hugely respect David for coming to the event and speaking about the great times and troubles he had at Commodore.  I know a lot of guys almost blame him for the death of the Amiga, so I could sense a little bit of a funny atmosphere about. 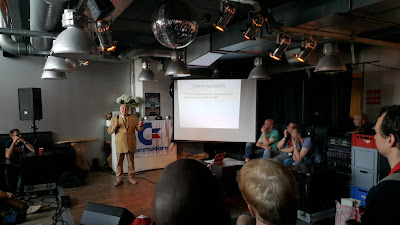 I have to say it felt like David had a chance to get a few things off his chest.  I don't know what to believe about the whole business situations, however he came across as very genuine and passion.  It's obvious he did do great things for Commodore and Amiga, direct actions he did like create the Amiga packages is still strongly remembered and talked about today.

The one, the only DAVE HAYNIE!

This guy, THIS GUY is a true Amiga rock'n'roll star.  His stage presence draws you in and still speaks with as much passion today than ever.

The energy in the room went up multiple levels, not just from Dave, but the crowd reciprocating passion.  This wall of love suddenly hit Dave which choked him and brought a couple of tears to his eyes. 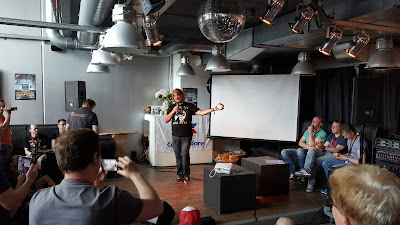 What a privileged it was to hear the words from his mouth explaining hardware decisions he made that not only made the Amiga the most amazing home computer that ever existed, but how that then has impacted every personal computer system since.

As the Commodore ship sank, he explained they were working on technology YEARS ahead of it's time which wasn't far off.

Again it's a joy to hear straight from the horses mouth decisions that were made, why they were made and how they were made.  The Guru Meditation and dynamically loading libraries, stuff we just take for granted toady. 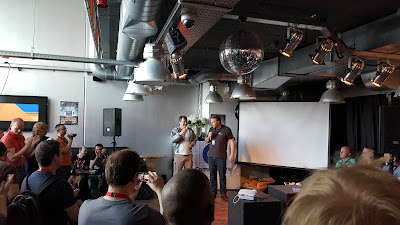 I hadn't fully appreciated that the Amiga team were in the thick of Silicon Valley. I'm so grateful that Carl left Hewlett-Packard to join Amiga :)  It's interesting to hear the connection between the companies, and interaction with Apple and Cray computers.

At this point in the day I had stood in the same place for about 4 hours glued listening to every speaker.  I'm gutted for the bad timing of when the 3 legends all took to the stage and announce that there was only 30 mins left to get lunch.  I hadn't realised the time or the fact lunch was even available. 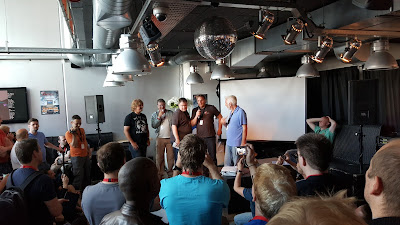 I was about to pass out so thought I had better get some food inside me, I lost my spot close to the stage and had to hang back listening from afar and eating.  I didn't get to listen to the 3 legends all talking at once, but I'm hoping the video of the talks will all be available soon so that I can watch back through.

For those of us who prepaid for lunch, we were given a special lunch ticket which was actually an original floppy disk :)

Lets get some fresh air!

The sun was shining and it was about time I checked out the tent outside with a few things going on.  A few people had brought their own machines, there were companies selling games, hardware, memorabilia, all sorts! 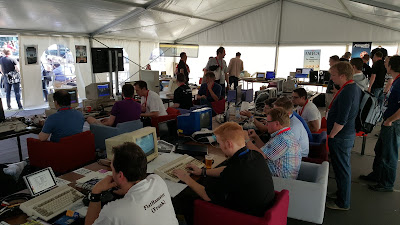 I had a period where I was able to chat to other Amiga fans and chill out.  I'm not entirely sure what happened on the stage for the rest of the day, but I was in and out listening to different people as well as mingling with others outside.

What I loved about the format was that true legends were so open to talk about their true love, the Amiga to everyone and anyone.

That Eureka moment - This is why the Amiga is the best machine ever made...

RJ Mical - Just how does this guy keep his energy levels SO HIGH?!  I didn't bring anything to sign, I just wanted to approach him, so thank you and ask for a quick photo.  This isn't the RJ way.

As I stood in a line to get my quick moment with RJ, I realised that the Amiga had touched all of us in pretty much the same way.  All of us were saying how the Amiga just had that 'magic' about it, the perfect machine.  For some reason it was just 'different'.  And it occurred to me why the Amiga was so great, just listening to RJ talk.

RJ stopped every single person, sat them down and asked what the Amiga meant to them and wanted to listen to their story.  I mean, I've seen book signings and celebrities photo opportunities before, but I've never seen anything like this. 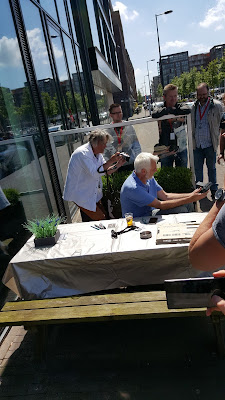 Someone had brought an Atari Lynx which was playing ported Amiga games and demos, RJ shouted "THIS IS THE BEST THING I'VE EVER SEEN!!! SEND ME THE ROMS!!" 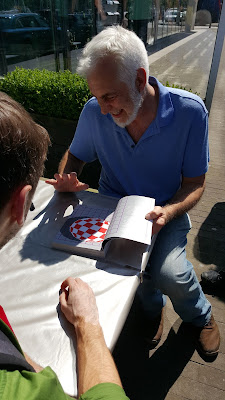 The guy in front of me had brought the awesome Amiga Book by Bitmap Books to sign, a book which I backed on Kickstarter months earlier.  It was great to hear RJ say how he loved the book so much and that it was beautiful. 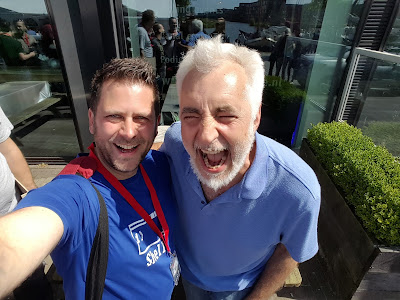 So I got my photo opportunity, as I was on my own, I asked for a selfie shot, which RJ thought was hilarious!  As you can see :) 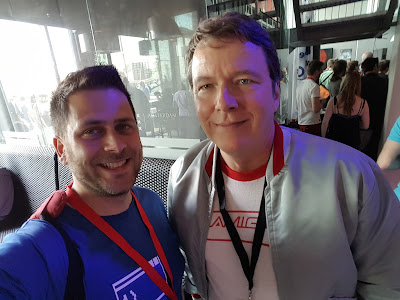 Carl was a little confused with the concept of a selfie as everyone else were getting much more formal shots. 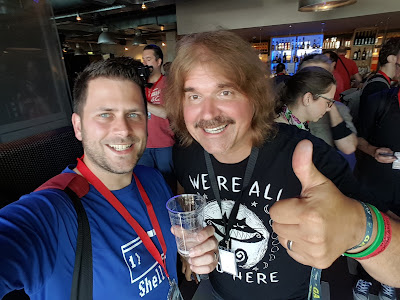 Dave just loved it, I can listen to this guy talk ALL DAY AND ALL NIGHT.

Back in the room

So I was able to catch a couple of guys on the main stage in the afternoon as well as a 20 minute preview of the up and coming film Viva Amiga.  It's an understatement to say I'm looking forward to this, the glimpse of what we saw, this looks like it'll be a very passionate, honest, sad and fun packed documentary. 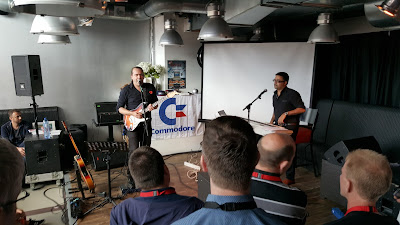 Jon Hare, a great set.  And everyone was waiting for it... they didn't disappoint...

We were left on a high as all the VIPs hit the stage, everyone packed in to say thank you and goodbye.  For those lucky few who bought the VIP extra ticket, they were treated with a ferry trip with the VIPs around Amsterdam.  From the pictures I saw on Twitter, they looked like they had a great time! 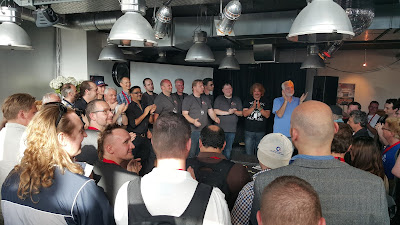 All in all and a special thank you...

This weekend has been the first time I've ever done anything like this.  I've realised that over the years I've been an isolated Amiga lover, sure I had mates who had Amigas and played a lot of games.  But seeing the passion and energy levels of all the people this weekend who STILL LOVE the Amiga has made me realise that I've missed out on many years of the Amiga community.

This weekend has now given me the drive to make more time for the Amiga, to properly get in to assembler, but also connect with the Amiga community.

Thank you to Amiga 30 for making it happen, thank you to everyone who traveled the world to be there, you made it awesome.

The Amiga 30 event in Amsterdam was truly fantastic for me, however, my weekend away would have been nothing without meeting 2 awesome guys who I shared most of the experience with.  A couple of Amiga demo sceners from Sweden, Jonas and Alex, who I can now call my friends and hopefully have more adventures in the future together. 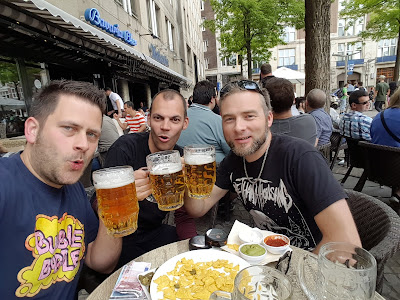 I'm so grateful for the sharing of knowledge, experiencing different parts of Amsterdam and the fun we had, thank you guys.