That's right, I recently sat down and browsed through an old Amiga Computing magazine I had...

Issue 41 to be exact, why issue 41 I hear you not ask?  Well I've kept all the Amiga Format, Amiga Power and Amiga Computing magazines we ever had.  Recently in conversation the game Mega Lo Mania for the Amiga came up.  Turns out issue 41 of Amiga Computing had a review of that very game, and a great review too 93%.

I came across one of those ads that advertised every game under the sun, there's plenty of them, this one was for 'Special Reserve'. Before I flicked the page over I realised, as a 12 year old kid, scribbled next to the things I wanted.  So I thought I'd share with you these things...

The Amiga games/software I wanted in alphabetical order:

OK so there were a couple of accessories I wanted too...

So I was after an awesome joystick and external floppy drive, never did get a joystick better than a standard Competition Pro, but did get the 2nd floppy drive about a year later.

And then there was the Nintendo Gameboy...

OK so I LOVED my Amiga, it was great then, and it still is today. At the time I never had a Nintendo product, they were top of their game and the Gameboy was so amazing.  This is what I wanted.  After months of my Mum pretending to not understand what a gamethingy was she secretly got me one for Xmas that year. 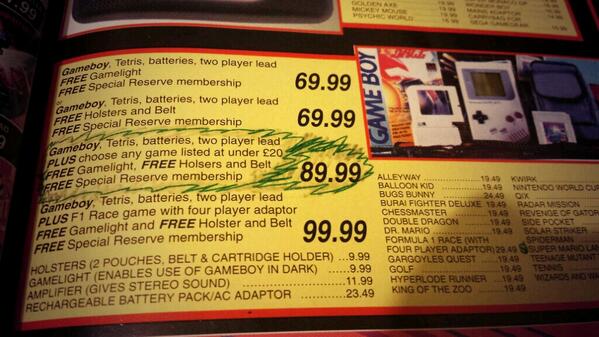 The Gameboy games I desperately wanted was Formula 1 Race (with four player adaptor) £29.49 and Super Mario Land £19.49.  What I find funny about this selection is that I didn't know ANYONE else with a Gameboy at the time, so no idea why I chose the four way adaptor.  Super Mario Land became a massive favourite of mine, but I never did get or play Formula 1 Race.

Yup they were the top things I wanted.  Nothing too exciting I know, but it's just funny looking back on things that a 12 year old me wanted.  When I look at all the other things on offer at the time, makes me chuckle.

Right I must get back to coding in Amiga Assembler...