#SpeccyJam is over - Nimble Jim submitted!

Finally got my #SpeccyJam game packaged up and submitted. What a week!

Took me a while, but finally came up with a name, Nimble Jim. I think the name fits perfectly for a tongue in cheek ZX Spectrum platformer. I also took some time out from coding to knock up a cheesy loading screen: 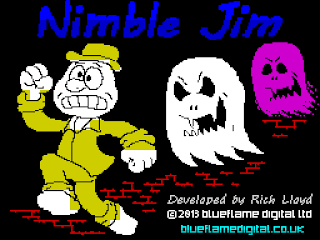 I thought some of you might be interested in how I put this together so here's some screen grabs of my steps. As you can see I'm no pixel artist, I'm just a coder. Instead of asking one of my talented artist friends to collaborate, I wanted to keep as authentic as possible as so many Spectrum games where made by 1 man bands. 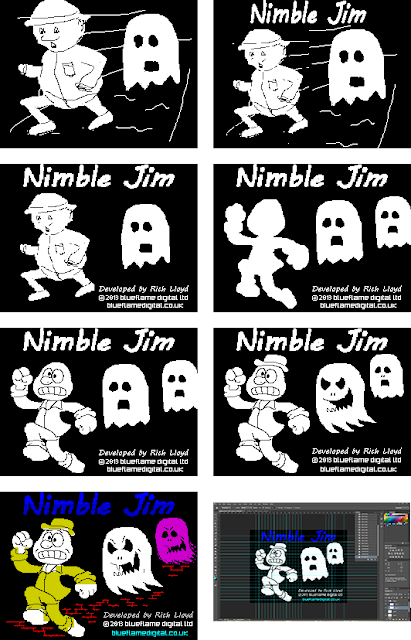 You can see that initially I just flushed out roughly the elements I wanted and the composition. When it came to drawing Jim I wanted him to be full of action, so I Googled a cartoon character running, dropped on to a layer in Photoshop and roughly traced the shape. It actually came together surprisingly well. With the text I used a couple fonts and turned off anti-alias settings to get a true pixelated look. I did still have to go in at pixel level and tidy up any dodgy letters.

It felt very odd to put a domain name on the splash screen, I almost didn't, but if domain names were about in the old days I'm pretty sure they would have had them on the loading screen so I kept it in.

I left the colouring towards the end of the process, you'll see that I used many guides to block out 8x8 pixels. As we all know the limitations, only 2 colours were allowed per 8x8 block. If I had more time I probably would have moved/redrawn some of the items to take advantage of the colour blocks. I also would have improved the ghosts, but hey.

As I got closer to the deadline, my brain was exploding with new ideas to add to the game. Knowing the time limits I had to be strict! Stuff I HAD to nail:

Anything else is a bonus

Having got in the above anything else was a bonus, here are some other features I managed to get in:

Here's a video of what I submitted. To make it more watchable, I used cheats to move through the levels quicker ;)

Here's a link to download the game I submitted to the #SpeccyJam:

Only available on Windows, extract the 2 files then launch the EXE file.

WHAT A GREAT WEEK! THANK YOU #SPECCYJAM!

Please check out all the other entries here: http://www.speccyjam.com/games/, there really are some great games here.

... and you can check out Nimble Jim's very own page here: http://www.speccyjam.com/games/nimble-jim/

OK Nimble Jim isn't the greatest game in the world, it's just a tongue in cheek effort, however I've been really inspired making it. It's been great working with limitations, and seeing all the other efforts for #SpeccyJam. Looking through Google + YouTube for ZX Spectrum games has brought back so many amazing memories, and I'm sure it has for everyone else.

30 years on, I spent a lot of my childhood playing games on the ZX Sepctrum, it was only until this week that I realised the Spectrum only used 15 fixed colours. I think this is proof that the games created back in the day had so much fun, engagement and creativeness.

There's some unfinished business here... I had so many ideas I wanted to get in the game, now the jam is over I really want to try them out. That's right you haven't heard the last of Nimble Jim! My aim is to put together 50-100 levels, and then launch the game on Android, iOS, Windows Phone and the OUYA.

Something I would love to do is actually port Nimble Jim to a true ZX Spectrum, yup learn machine code for the awesome machine and get Nimble Jim running where he belongs! Then... maybe produce Nimble Jim 2 in the style of an Amiga game?! Watch this space!!