Having never been to a demoparty before, it was about time I did. Being my first I really had no idea what to expect, I mean NO idea.

OK I've been slack with the Amiga 68k assembler over the last couple of years, but it's still in my heart. I've seen plenty of demos on YouTube, and even watched comps live, but really had no idea what the whole experience would be like. 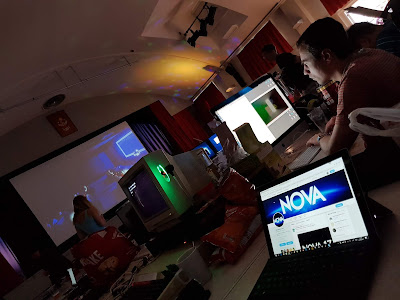 I'm lucky enough to live about 2 hours away from the venue, and being UK's only demoparty, this year I thought I'd try my best to get there. The stars and moons aligned and I DID!

On arrival with not 100% sure if I was at the right place, I was quickly reassured when I saw like minded people hanging out at the back of the hall. With a quick glance in the venue I could see the arrays of old school hardware lined up on the tables.

Announcing to the small group outside it was my first time, the friendly faces soon set me up with what I needed to know. Find a spot and settle in for the ride. I knew only one person that would be here, and that was DJ h0ffman, a regular on the demo scene. 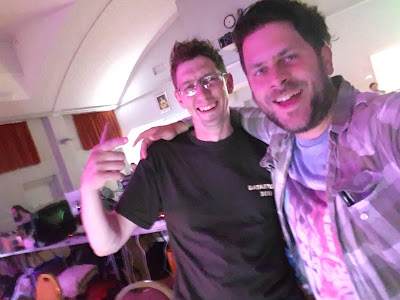 So what demo did I submit for comps?

OK OK, so in an ideal world, I would have loved to have worked on my first ever Amiga demo. Realistically, I'm still in such early days with Amiga dev, this was going to be impossible. When I confirmed I was attending the event, time already wasn't on my side to be producing anything half decent to enter competitions with. Again, being new to the scene, I wasn't sure on what was expected from a demo, how the comps even worked, nothing really.

I saw there was a 'Wild' entry point, a comp that didn't have any limitations. I've been currently been working a lot with Augmented Reality recently, and had a small idea I could possibly get together in time.  I made a start. The idea would be to use the Amiga 500 floppy startup image as an AR marker image to kick off a demo in AR. Built in Unity, I found and bought some 3D assets... Amiga 500, floppy disks, Commodore Monitor, tank mouse... these would be my props that appeared in the AR experience. The demo would then see Amiga related demo/game items appear, e.g. the Amiga bouncing ball demo starting on the screen and then breaking through it's boundaries, bouncing around the virtual AR Amiga and monitor. I wanted Lemmings to drop from the sky and start marching across the hardware.  Sine wave text shooting through the sides of the monitor's display. Nothing spectacular, but this would be my nod to the Amiga and demo scene.

Unfortunately, with time already not on my side, my work load increased leading up to the party, and I was left with a started project that just wasn't going to get finished in time for Nova 17. Instead I've decided to carry on with this side project after the party and get it to a great place where I can submit it to a comp at some point in the future!

With the mindset of not submitting anything this time around, I pretty much sat back, absorbed the vibe, and was constantly entertained with the conversations and activities going on. Work and family life have been to the max over the last couple of years, and I rarely get a chance to work on my own side projects. I started a game idea at the start of the year, so I used my time over the weekend to make further progress with the game. It was such a great environment to get my head down and code for passion, rather than trying to hit deadlines and fulfil client's requirements.

EDIT: - This project turned in to my first published game on the Google Play and Apple App stores... PingIt 1984 http://pingit1984.com

back to the party...

I have to say what an amazingly friendly place it was. Many people introduced themselves to me, and when I wanted to find out about the kit they had brought along, everyone was happy to share and talk about their love. What really hit me about the party was how everyone was just so friendly. I guess a whole room with like minded people fuelled with a passion of old school computing combined with a party atmosphere, good times were had by all.

The heads down of last minute tweaks and pure passion went well in to the nights. I ended up each night finding a quiet corner and crashing on an air bed and sleeping bag. With events like these, you don't really need sleep, you're fuelled on passion and the energy of the people around you.

So was it just Commodore Amigas?

NO! I think Amiga was probably the most popular hardware there, but there were also Atari STs, ZX Spectrums, BBC Micros, old gen consoles... The absolute highlight for me, it was the first time I'd seen a Vectrex in action, in real life!

One of the comps this year was a homebrew beer competition. Sure enough there were 2 kegs of homebrewed beer for us all to help ourselves to and eventually vote for.

It's tradition for the party on the final night, after the comp entries and the party music is turned down. The group head down to the moon lit beach with a mini music blaster, cool beats and a mega pack of bacon. A spot is found down the beach not to disturb anyone and bacon is cooked on a camp fire which is distributed in white baps amongst the group. The setting and chilled beats are a perfect finish to the long day.

The results are in...

On the final day, people rise and start to mingle for the last time with old and new friends. Jack Box was fired up on the large screen and was a great way for the whole party to have some final fun as we waited for the results to be called out. As the results were announced it was great to see hard work recognised and generally a lot of fun reflecting over the weekend.

After an awesome weekend of fun it was time to set off home to reality. I didn't know what to expect before the weekend, and left with passion, inspiration and new friends. I really do hope I can make it regularly over the coming years. And HECK maybe I'll even submit a demo!! 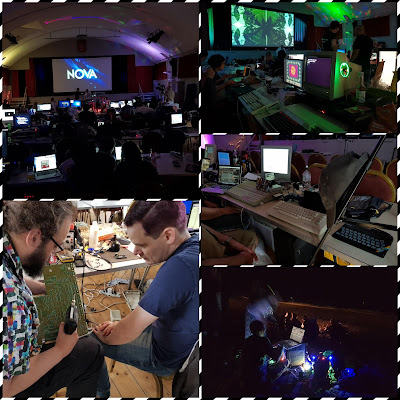 Were you there? Do you wish you were there? Comment here or get involved on twitter: @rich_lloyd